At the Borders of Music, Art and Text

Before undertaking this project, most of my music was characterised by the attempt to keep as tight a control as possible over the music I was producing. Working directly into a computer to hear back the melodies, harmonies and rhythms I was notating and avoiding techniques that could not be played back by a computer, the main purpose of this approach was an attempt to dispel the fear of the unknown by reducing the element of risk in my work. With this project, I set myself a challenge to work in a more open manner, changing my process and confronting the fear that comes with risk-taking, however minor.

I use the term ‘open’ to indicate any situation in my work where I do not have control over the sounds which are ultimately produced. This may mean, for example, including improvisatory aspects in a piece, or it might be using notation that is intentionally vague in terms of rhythms, durations or pitch. Over the course of the year I have also worked with concepts that can be categorised as ‘experimental music’ according to John Cage’s 1955 definition of the term: ‘an act the outcome of which is unknown.’(fn3)

My initial ideas about openness are based in my early research into Richard Long. The level of openness in his approach to recreating works for which precision seems to be a vital element intrigued me. Long’s gallery sculptures are recreated by others from instruction cards that remove the need for the artist to be present. Long states that there is ‘definitively room for error in the way it is made, if the procedure is not followed exactly’.(fn4) This possibility does not seem to disturb him, instead he seems intrigued by the differences which may emerge: ‘Sometimes I’ve seen a work which has been put up slightly different from the way I would have done it. But actually it is very interesting and it even looks a bit better than how I would have made it. But other times… most often it happens that it is put up carelessly. If it is meant to be a circle maybe then it is not quite a real circle.’(fn5)

The same attitude applies not only to the form of the piece, but also to its component parts. In response to the question, ‘Do the works ever get damaged?’, he replies, ‘They may, individual pieces might get damaged or broken. But I suppose that the parts of any piece are not themselves precious so they can always… if one of the sticks from the big work in Otterlo got stolen or broken, they can just go out in the forest and get some other stick.’(fn6)

This statement in particular made me question what areas of my work might benefit from this type of relaxed approach.

In part to explore this idea, and partly to confront my own fear of the uncontrollable, I created my first text score piece, Parlour Game for three voices.(fn7) Seeing a parallel between Long’s sculpture instructions and text scores such as Michael Parsons’ Walk, Yoko Ono’s Cut Piece and particularly La Monte Young’s Composition 1960 series, the format of a text score seemed appropriate – and had the benefit of removing the temptation of control associated with working with more conventional notation.

I decided to test my own capacity for uncertainty by creating a piece that could (from my perspective as a composer accustomed to controlling every aspect of a composition) go horribly wrong: that could be chaotic, or unintelligible – or just dull. To this end, the score includes the following points of potential for ‘disaster’:

Examining the original score of Parlour Game(fn8) it can be seen that, in spite of my declared aim of wanting to face failure, I had nevertheless set up rules that anticipated a number of these situations. However, what I had overlooked was the possibility that the audience might be reluctant to participate in the game of Chinese Whispers required to provide the performers with text. In performance, the rumours barely circulated at all and none made it to the singers who therefore had no content with which to move on to the more active part of the performance. The problem was overcome through performers from another piece in the event leading audience members to the singers and encouraging them to hand over their rumour slips. This bypassed the Chinese Whispers concept but allowed the performance to develop.

Devising Parlour Game and experiencing its performance – and reading John Lely’s excellent article ‘On the Use of Grammar in Verbal Notation’(fn9) – resulted in greatly simplified parameters, a reduced number of scenario responses and made explicit the need to communicate the audience’s role to them in the revised version.(fn10) I recognised that even using a different form of notation, I was still trying to control the outcome of my compositions.

Sepiascape with Grey(fn11) is a graphic score which was requested by Valentina Pravodelov, a Masters student in voice at the Institute of Contemporary Music Performance, for a performance of darkly urban popular music by bands including Joy Division and Massive Attack. My interest in graphic scores having mostly centred around observing how different musicians respond, without my interference, to visual material, Sepiascape with Grey was provided with no guidance or constraints specified. While I find the results of these open graphic scores interesting, this extreme level of openness produces music over which I feel often feel no real ownership, ‘I [feel] that the scores [are] mine but the pieces belong to my performers’(fn12). Sepiascape with Grey confirmed for me that this approach is not one I want to pursue further.

However, on later reflection, I find I feel more strongly about Sepiascape as artwork than as music. I am happy for musicians to interpret it as music but it is primarily a visual object. The realisation that I had been justifying art creation by ensuring it had a musical context has been key to developing the more independent role that art now occupies within my creative practice.

In Drowning Songs for a cappella chamber choir, a piece commissioned by the Trinity Laban Chamber Choir, however, artwork is very much at the service of the music. Returning to Richard Long’s ‘some other stick’ idea, I worked through an idea for the opening of the piece by creating a mixed-media artwork (Fig. 1). 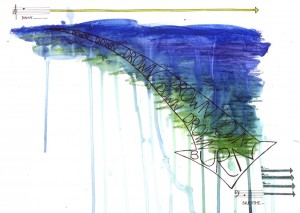 The physicality of the visual approach helped me to identify which elements in this section I wanted to be precise – starting pitches, independent motion of voices – and which I didn’t – timing of entries (so long as they were not regular), the pitches for ‘Burn’.

For the whispered names, which are the other prominent feature of this piece, the most important thing was for them to sound like they were being spoken naturally. I correspondingly discarded early attempts to notate the rhythms of the names, instead relying on the ensemble to work out unison rhythms in rehearsal.

Drowning Songs also uses a freer approach to text than previous vocal works. Compiling text from multiple sources and drawing in or developing new text as the piece demanded it, I believe has integrated the text tightly into the music, so that it serves the needs of the music, rather than the music serving the needs of the text.

An intense period of creative block towards the end of Drowning Songs prompted research into the role of fear in the creative process. This has been vital in changing my attitude towards fear and risk in my work. Particularly useful in the early stages of this examination was Jonathan Fields’ Uncertainty: Turning Fear and Doubt into Fuel for Brilliance,(fn13) which discusses the place of fear in any creative endeavour (not only artistic ones) and provided practical tactics to manage, rather than avoid, uncertainty and risk. Eric Maisel’s Fearless Creating: A Step-By-Step Guide to Starting and Completing Your Work of Art clarified for me the relationship between fear and creative block: ‘If you are to create, you must invite anxiety in. But then you must manage it. If you can’t manage this necessary anxiety, you will block.’(fn14) As another perspective, Emma Cocker talks about the transformative power of not knowing in the creative process:

The fall from what is known requires some loss of power and control, whilst the passivity and apparent weakness often associated with falling are converted into a potential means of strength. Not knowing is thus practiced as a kind of alchemy, transforming its own perceived impotency or powerlessness into a productive force.(fn15)

Improved understanding of the role of risk led me to develop a mantra: ‘Follow the fear’, meaning that I examined my work and how I felt about it at regular intervals and changed my approach to consciously follow the path that felt harder. If I felt resistance, then it was likely to be something worth trying.

7. First performed by Jillian Bain Christie, Emma Lewis and Luke Faber at the Rude Health ‘I Hear Voices…’ concert of experimental music on Friday 6 December 2013 at Trinity Laban Conservatoire of Music and Dance.

8. See Appendix 2 for the original version which was performed at Rude Health.

9. John Lely, ‘On the Use of Grammar in Verbal Notation’ in John Lely and James Saunders, Word Events: Perspectives on Verbal Notation, New York: The Continuum International Publishing Group, 2012, 3-74.

10. The revised version is included in the composition portfolio which accompanies this dissertation.

11. The score and recording of Sepiascape with Grey can be found in Appendix 3.

15. Emma Cocker, ‘Tactics for Not Knowing’, in Elizabeth Fisher and Rebecca Fortnum, On Not Knowing: How Artists Think, London: Black Dog Publishing, 2013, 129.